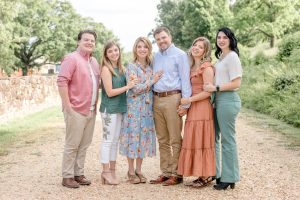 Leonard and his family moved to Stafford in August 2007 from Raleigh, NC where he served as Assistant Pastor of Youth and Families as well as Worship Director for 10 years.  He is a graduate of Reformed Theological Seminary in Charlotte, NC and Towson University in Towson, MD.  Leonard is an ordained minister in the Presbyterian Church in America.  Leonard and his wife, Amy, have 3 daughters and one son.

Leonard was called as Pastor of Church Planting by New Life in Christ Church in Fredericksburg, to begin a church planting network involving the counties of Stafford, Spotsylvania, Caroline and King George and the city of Fredericksburg.  Without knowing one person in Stafford, he began making contacts with people through various resources and spending countless hours on his knees in prayer.  After only being in the area 2 months, a core group was born, and began meeting in the Bailey’s living room in October.  As the group grew, so did the excitement of a new reformed church in Stafford County.

Concerned not only with creating a new church, the launch team was also intentional about community outreach.  The Saturday before public worship was launched, the group held a community Easter Egg Hunt on the grounds of the H. H. Poole Middle School where worship was to begin the next day.  The vision of community doing outreach was an amazing providence.

On July 25th, 2010 Hope of Christ became a particular congregation of the PCA.  Leonard is now looking to bring on apprentices and interns as he seeks God in starting new churches in the surrounding counties.  God has been faithful in blessing Hope of Christ with ministry minded folks, and as a body, we look to the future with earnest expectation as to what God will do with and through us to expand His ever advancing Kingdom.

On Sep 8th, 2014, Hope of Christ moved to Stafford Adventist.

In 2020, Hope of Christ moved to our current location  We continue to grow in the grace and knowledge of our Lord Jesus Christ.